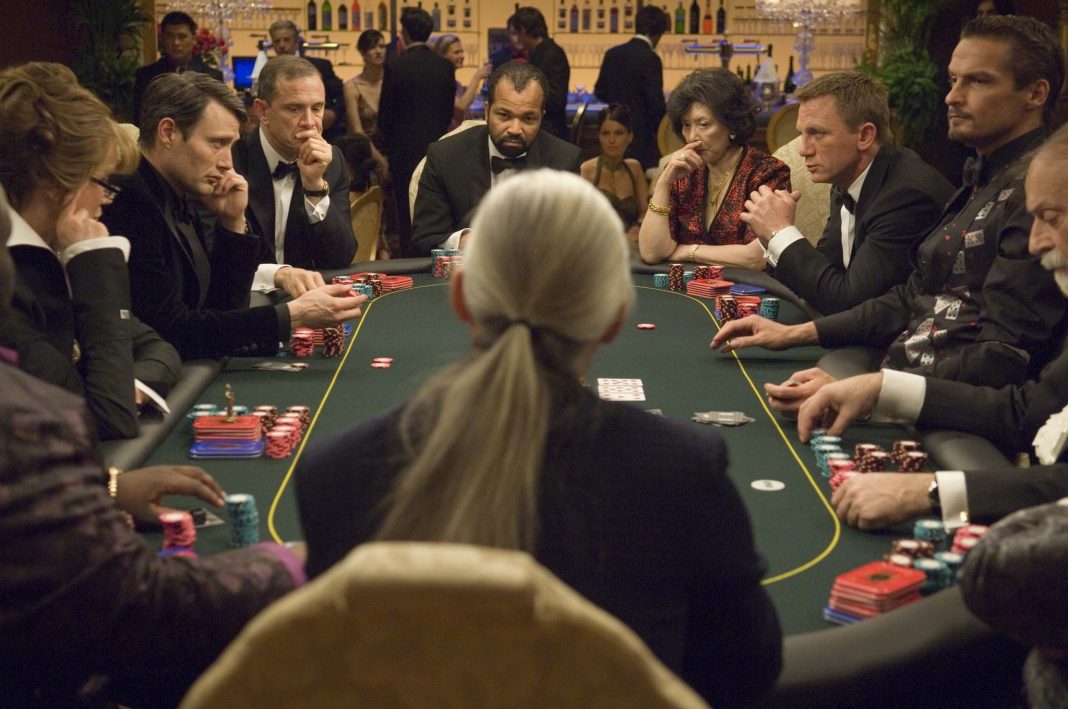 Guide to Betting on Women’s Football

Get Started with the Rules of Texas Hold ‘Em Poker

Rough-hewn MI6 hitman James Bond gets his 007 status despite a reputation as a hot-headed outsider, but learns a few harsh lessons when ordered to bring down a debt-ridden terrorist arms salesman at the poker tables of Casino Royale.

James Bond, in his 21st film and 44th year, gets a back to basics re-invention thanks to the producers finally securing the copyright to Ian Fleming’s very first Bond novel. Credit to the producers for not sitting on their laurels, especially given the continuing box office health of the series during the Pierce Brosnan era. Brosnan was a popular Bond and it was definitely a risk to go back to the drawing board in such a radical way.

What made the producers do it? The answer is probably the success of the Jason Bourne films. With their gritty action sequences, complex plots and in-your-face filmic styles they successfully re-defined the spy genre for the 21st century. Compared to them Bond looked a bit like yesterday’s man, and even though the series didn’t desperately need rescuing, the producers probably felt that the acquisition of Fleming’s original ‘Casino Royale’ story presented a good opportunity to modernise their ageing spy franchise by essentially going back to square one.

Starting the character again from scratch is one thing, but what about the radical departure made in the casting? Bond, as originally created in 1953, was by definition a 1950s figure and his casting has largely stuck to the basic tall, dark and handsome matinee-idol model. However, the mould was definitely broken with the casting of Daniel Craig, which caused something of an outcry at the time. Average sized and stocky, with a rugged, boxers face and blonde hair, Craig was not the expected chip off the old block. In the end, however, Craig not only convinces as Bond, he triumphs.

This newly-minted Bond is confident, headstrong and arrogant, but not particularly polished. He comes over as rash, impatient, brutish and impulsive. He gets beaten up in fights and his face betrays every punch-up he has ever been involved in. Casino Royale – more than any Bond film before – had a clear character arc; taking our hero from crude, instinctive assassin to his final destination as a more measured, professional and dispassionate secret agent

Craig deals with all of this splendidly, even if the film itself is not always so sure-footed. It takes time to properly get going, beginning with two well staged but slightly overlong action sequences, as if to initially reassure the core audience that the grand Bond tradition of big-scale action for its own sake is still in place. It also has some early lapses back into the Roger Moore era of coy receptionists simpering over our hero. Not surprisingly, Craig looks least comfortable in these moments.

Once we finally move into the main plot – a high stakes poker game to break an international terrorist supplier – the film really takes on its own life and becomes something genuinely new in the Bond catalogue. This begins with a cracking dialogue exchange between Bond and his belatedly introduced leading lady Eva Green, playing a treasury official there to bankroll him.  Sharp psychological exchanges laced with sarcasm and vitriol are not usually the stuff of Bond films, and this sets the scene for changes to come. Relationships become more complex, action scenes get more brutal and singular. We see the aftermath of violence and the effect – both physical and psychological – it has on those involved. No more one-line quips and tie-straightening to end a killing here. This is raw, compelling stuff, clearly designed to bring out the best of Craig’s qualities. The film proceeds from this point to follow Fleming’s novel fairly closely, including the famous torture scene involving a naked Bond, a bottomless chair and some fairly nasty weights.

The only minor miss-step is to develop a typically spectacular if rather gratuitous ending to keep the fans happy involving a collapsing house on the Rialto in Venice. And a final plot twist completes the character arc for the newly minted 007. By the final shot, delivering his iconic introduction for the first time, we know that he has learned a few lessons about life, love and how he must handle his own profession.

No doubt about it, this rough-trade, re-imagined Bond is a breath of fresh air.